First appearance: What If? #88 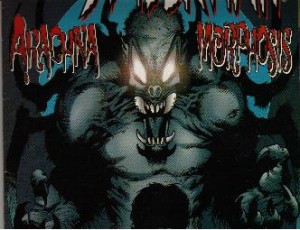 This is a what if story, here is the background. What if Peter Parker didn’t become a hero? What if he became a flesh-eating monster by night? What if he had married Gwen Stacy, who died giving birth to their son? What if Peter’s son, Ben, had the same illness as Peter?
Well, this is what would happen: Peter Parker is working on developing a serum to cure him and his son. Meanwhile, at the school, Ben gets beaten with a baseball bat by “Flash”‘s son, Butch, because Ben is a mutie. Mary Jane’s daughter, Sarah, steps in and kicks butch in the jimmy, thus allowing Ben time to escape. Ben gets mad, and tries to get run over by a train, but Sarah saves him. Ben’s face is revealed, and boy is he ugly. Sarah says she wants to help him, but he runs off anyway. After a father-son confrontation between Ben and Peter, Pete changes into the ugly form and eats his dog. There are three pages of father-son confrontation following that, because Peter wants to send Ben to Xavier’s school for the gifted blah blah blah. Ben runs away to talk to Sarah, when he finds her he starts to morph. Butch shows up to beat up Ben, Ben gets one good shot in before Butch starts breaking his bones. Sarah leaves the battle scene to find Peter. Peter finds out that Ben may get killed, and then morphs. It turns out that Ben had already killed Butch. His last words are “Parker”, Flash think he meant Peter, so he gets his buddy racists to go find Peter. Some policemen find Ben (who is morphed), thinking he is Peter. Ben escapes the policemen only to be found by the ever-so-hateable FoH. (That’s the “Friends of Humanity, for you non-X-Men readers) Ben gets shot at and beaten until Peter (who is also morphed) sacrifises himself for Ben. Ben ends up going to the X-Mansion.

This was a really good read. Despite the surprising amounts of violence, there is a lot good content. It’s one of those comics that almost (I said “almost”) makes me, I mean you cry. The art is good too.