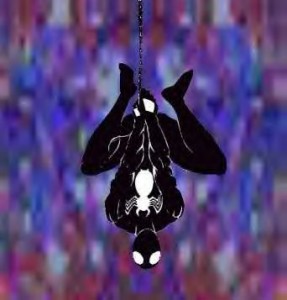 While Spider-Man and a whole bunch of his super hero pals were stranded on a planet during the Secret Wars, his colorful spandex costume got sliced and diced. Spidey discovered this wonderous, high-tech costume making machine. The result: a super-duper shape shifting costume that responded to his thoughts! It had unlimited webbing, too.

Unfortunately it was discovered that the costume was in fact an alien symbiote that was trying to take over and permanently bond with him forever! Luckily, with the aid of Reed Richards, leader of the Fantastic Four, the costume was separated from him and contained in a special holding cell.

The menace of the alien costume was not yet over. The costume, after escaping from the Fantastic Four, once again came after Spider-Man. Disguising itself as Spidey’s old blue and red duds, Peter unknowingly put it on. In Web of Spider-Man #1, the ensuing battle for the control of Spider-Man’s body led to a conflict above the rooftops of Manhattan.

Spidey was trying to get the symbiote to the Fantastic Four Baxter building, while the alien was doing everything in it’s power to prevent this. Spidey lured the symbiote to a church and uses the peal of the bells to disrupt the alien.

Unfortunately, Spidey succumbs to the bells before the costume, but before he perished the symbiote saves Spider-man because of the relationship developed during their attachment. Spider-man’s rejection leaves the symbiote in a confusing love-hate relationship for the wall-crawler. The symbiote finds a new host, Eddie Brock, and returned to haunt him as Venom.