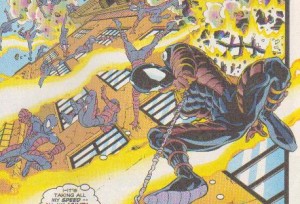 This wonder of a costume happened when Peter Parker was getting harrassed by Electro on a nearly daily basis. Peter pretty much said enough is enough and he made a new costume and special webbing. He and X-Man battled Electro and when they defeated him Electro decided he would level NYC. Spidey stopped him and Electro killed himself. The costume was destroyed and has not been seen since.