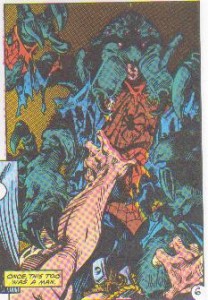 Throughout his career as a super-hero, he has had countless strange adventures. But none were as bizarre as when the evil Brain-Child used an arcane device to de-evolve Spider-Man into a monsterous creature more spider than man. Peter might have been forever trapped as a terrifying monster if Karl Lykos hadn’t used his his energy siphoning powers to steal Spider-Man’s excess energy. The power draining process inadvertently changed Man-Spider back to Peter Parker, while transfoming Lykos into the villainous half-man, half-pterodactyl known as Sauron.