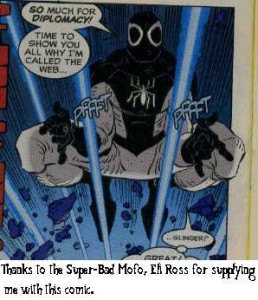 Way back during the Identity Crisis deal, Spider-Man was getting hunted by any bounty hunter who wanted to bounty hunt. Three kids got sucked into the Negative Zone and Spidey had to go help them. While in the negative zone S.H.O.C. (remember him?) gave him an armband, which probably turned into this costume. Spidey battled evil in the Zone for a while, before…. well… I’ll tell you the rest next month in the upcoming dusk bio.