He first appeared in: Amazing Fantasy #15 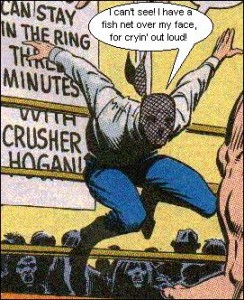 If you don’t know the story behind this one then shame on you; but here it is: Less than an hour after young Peter was bitten by the infamous radioactive spider, he sees a sign offering $100 to a schmuch who can stay in the ring with Crusher for more than three minutes. Peter figures he should try out his new found powers on Crusher. Donning a fishnet for a mask and old clothes for a “costume” (Which is still better than a lot of the wrestling costumes out there now) he jumps in the ring and after some insults, guess what? Crusher surrendurs (or whatever you call it in wrasslin’)! A portly fellow think this “Masked Marvel” is just what he’s looking for and Peter takes his money and we never see this costume again, except in flashbacks.