Costume of the Month for February 2001 is… 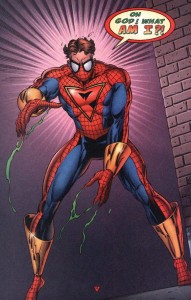 This is what happens when a superhero (Prime) tries to help out Spider-Man when his (Prime’s) powers aren’t working for some reason. Prime’s host tried to “Prime Up” but instead changed into this freak! He sprouted four additional arms immediately after mutating. Although the plot of the book was weak, the costume is cool.