first Appeared in: The Spectacular Spider-Man #66 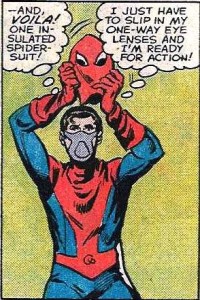 Spider-Man fights Electro every once in a while and three times (that I know of) he modified his costume in order to battle this villain. To prevent himself from being electrocuted, he made took a mattress and made it into an outfit similar to his standard. And no, that’s not a belly-button, that’s what you blow the air into on a normal matress. Our hero, of course, won the battle.