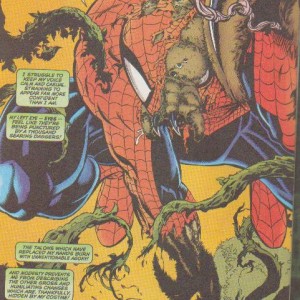 Don’t get me wrong, I love DeFalco’s writing. This story, however… was not exactly his best. It starts off with Spidey saving the mutie known as Synch. A short time later Plant-Man sends a plant to spray Synch with some thing that turns him into a hulking, mindless monster. Fighting ensues between Synch and Spidey. Plant-Man lures Spidey into his lair and mutates Spider-Man into Spider-Beast (dant Dant DAAAAHHH!). Spider-Beast fights some big wooden… things… and Synch is all of the sudden just as intelligent as he normally is (but still as ugly) and helps Spidey beat up the things. Spider-Beast catches Plant-Man and acts unusually violent towards him. Before you know it, Pete Parker is okay again and so is Synch (the filthy mutie) and they both live happily ever after.