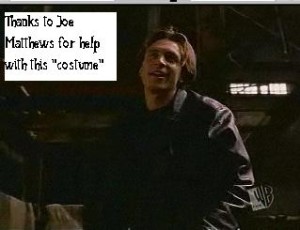 I am still a “True Believer”, these episodes show tangents to Marvel Comics in many ways. First off, as Your Man at Marvel pointed out, this show is basically “Ultimate Superman”. Secondly, the villian in this episode, Greg Arcan, is a geeky science whiz. Greg, gets pushed around by the “Flash” Thompson-esque Whitney. This kid has glasses and is stung by some Kryptonite-infected bees, he is also refered to as Bug-Boy. He becomes able to shoot webs out of his mouth, recieves enhanced strength, speed and agility and can climb on walls. Scary Stuff. There are lots of bad bug sub-references in the second episode.