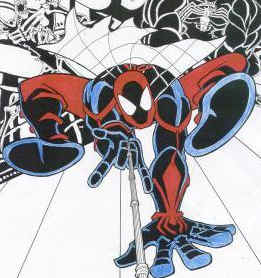 This costume was made for the TV show with the same name as the comic book. The cancellation series was an ill-fated result of Poke-Mania. The costume is capable of many cool things. It has “stealth” mode, infinite webbing, and it can turn into any kind of clothing that Peter wants. As if that isn’t enough, it can be used as an astronaut’s spacesuit.

The series took place on an alternate earth ruled by High Evolutionary and Wundagorian animals. Humans are second-class citizens, and are frequently sought to be attacked. Carnage and Venom are buddies in this reality. The Green Goblin is a good guy who teams up with Spidey. It was kinda cool while it lasted.