He Appeared in: Spider-Girl #5 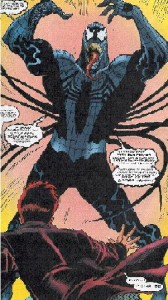 Here is Spidervenom. It is venom when it takes over Peter Parker in the future. Oddly enough, May Parker’s spider sense seems to react to it. Whether this is some kind of biological attachment to her father’s spider sense or because the symbiote was created to override Peter’s spider sense and no others. It is probably the last option or a mistake on the writer’s part.
~Thanks to Jserio for the pic and info above!