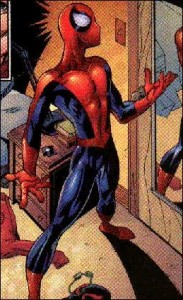 This costume was made custom for Peter Parker after the wrestling commentator thought he looked “like a dork” in his old “get-up”. Peter wrestles one match in it before being accused of theft and getting kicked out of the wrasslin’ club. Peter fights small amounts of crime in this costume before modifying it to the classic version.

Note: The back of the costume looks exactly the same as the front.