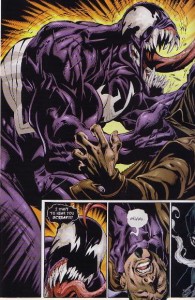 Well, Bendis continues to amaze us with his ability to write the perfect Spider-Man. We’ve waited a couple years for Venom and it was worth it. In this universe, the symbiote was designed to cure cancer. It was also created by Peter’s dad and Eddie Brock’s father. Both of which have passed away. However, the formula was screwy and Peter was affected by the symbiote and almost killed a street thug. He gave up the costume and Eddie started using it. Just buy the comics, they rock.