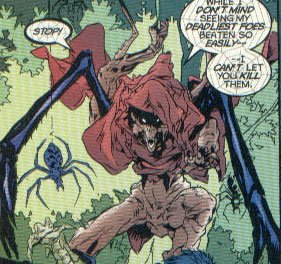 Webslinger has a variant on the classic origin: He was given the powers of a spider from a Madame Web analogue (presumably), but with the condition that he would never use it for personal gain. One day, his uncle was being attacked and he used his powers against the no-good-nicks and was then cursed to appear the way he does now. He also was forced to guard Webwood and (get ready for it…) sworn to protect those who hate and fear him.